Do you have the talent, flair, skill and passion to become The National Chef of the Year 2013?

Running since 1972, The National Chef of the Year competition is one of the UK’s most sought after culinary titles, awarding the crème de la crème in the chef community. The competition has helped to launch the careers of some of the industry’s most celebrated chefs, many with Michelin stars. Past winners include Gordon Ramsay, Mark Sargeant, Simon Hulstone, Frederick Forster and last year's winner Alyn Williams of Alyn Williams at the Westbury.

Recent 2012 Title holder Alyn Williams said, “Winning the National Chef of the Year 2012 was a very personal achievement, it was a bit of a holy grail, having been placed second in 2011. I am very humbled but also extremely proud to now be amongst so many great names in the industry that have won the title over the years. The title came at the end of a very rewarding month along with other accolades for my restaurant all coming in quick succession. I have high hopes of the opportunities that will come as a result of winning the title, and now look forward to being part of the future of the competition.”

Winning this competition is all about the chef’s individual performances on the day in front of the panel of respected judges. It is not based on their personality or past triumphs but on culinary skills and interpretation of the ingredients they demonstrate when the pressure is on! 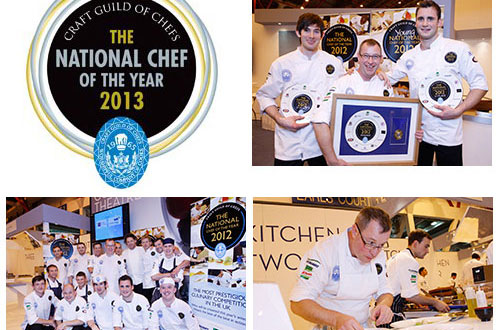 The competition is open to chefs who are 23 years or older as of April 1st 2013. Competitors may come from all areas of the hospitality business including hotels, restaurants, pubs, contract catering, fine dining, private and public sectors. Competitors may be working in the UK or overseas.  Entrants are required to devise a three-course lunch menu for four people.

From the paper judging, 40 successful entrants will be invited to compete in the semi-finals, with eight chosen to go on to the final, taking place at the Restaurant Show at Earls Court in London on Tuesday, October 8th.

As well as national acclaim, the title winner walks away with an impressive haul of prizes. Last year Williams won cash, an exclusive study trip with dinner at a three Michelin starred restaurant in France, a study trip to Norway, master classes with industry greats and specialist chef's products and equipment

Lockhart Catering are proud sponsors of this prestigious competition and we are encouraging you to rise to the challenge and enter the Craft Guild of Chefs National Chef of the Year 2013!