Posted by Lockhart Catering
on 1 June 2021

The Right Course charity devised by Fred Sirieix opened their second fully functioning prison-run restaurant based in HMP Wormwood Scrubs in April 2021. The Right Course seeks to transform staff restaurants in prisons into high street like operations / businesses, as well as allowing the prisoners to gain industry-recognised qualifications and experience.

We were delighted to be able to interview Fred Sirieix on his passion to train and develop offenders, and the opening of the HMP Wormwood Scrubs restaurant and café.

Learn more about The Right Course

Where did the passion originate from that inspired you to create this initiative?

“I’ve worked with young offenders for the past 16/17 years, through my charity work I realised that it was important to get to the root of the reoffending. It seemed obvious there was a missed opportunity in prisons to create training, and to operate prison-run restaurants as if it was a catering college. We want to teach the offenders the values and skills it takes to work in Hospitality, they can then use these skills in any walks of life. To do this it's important to us to have the right partners, and together working towards a common goal to train the offenders so that when they are released they live a law abiding life.” 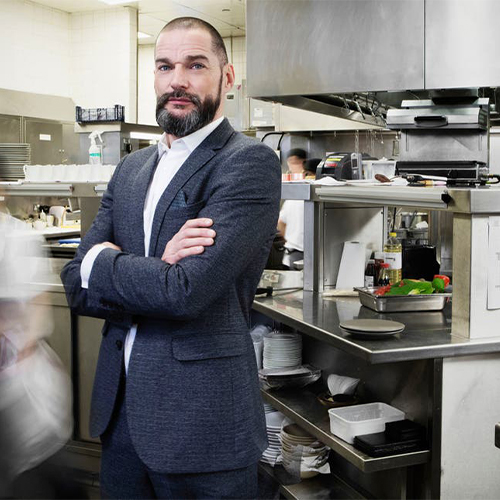 Lockhart Catering Equipment have supported The Right Course since the first restaurant at HMP Belmarsh in 2017, with the help from Lockhart’s Exclusive Tableware brands, Crème & Artisan, and some of the UK’s leading suppliers such as RATIONAL, Falcon and Lincat.

"We're not just working with Chefs, we're working with many organisations and the point of The Right Course is to ensure that people have a job upon release because when you think about reoffending there are three main factors to it. The first one is not having a job, the second one is having nowhere to live and finally not staying in contact with friends and family."

How have the prisoners in HMP Belmarsh adapted to the responsibility of running the restaurant?

“Very well. When I was still at Galvin at Windows, I employed one of the offenders as a Commis Waiter and by the time I left he was a Chef de Partie. This just demonstrates that when you give someone chances and opportunities, they will thrive.”

Can you give us an example of the sort of dishes that are being prepared in the restaurant?

“HMP Wormwood Scrubs is special opportunity, as we’ve implemented a café style operation and city restaurant. In the café we will be doing sandwiches and takeaway soups as well as cold and hot drinks, and in the restaurant, we will be working to teach the offenders as many techniques and recipes as we can. Now on the menu we have got, Fish and Chips, Tacos and Chicken Green Curry.” 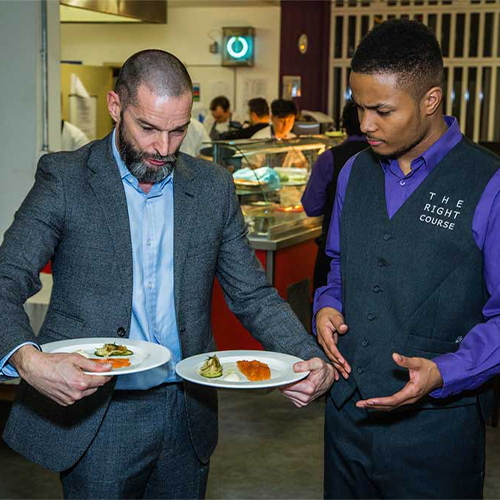 Is there an area of the restaurant that the offenders particularly like to train in?

“For a lot of them this is a new experience, and they are happy to work wherever they are placed, the key is for them to really own their skill and to master whatever they are doing whether it’s being a chef or waiter. It’s important for us to really drill down those skills, so that by the time they leave they are fully proficient in what they are doing.”

What do you think it is about Hospitality that may have a long-lasting effect on rehabilitation?

"The thing with Hospitality is that it's about the basics, and the basics are the same in anywhere you are. They are universal, if you can do well in a roadside cafe then you can do well at The Ritz. It's all about having the ability to work well under pressure, turning up on time and confidence."

Is there anything planned in the next 6 months for The Right Course?

"We are working with several prisons at the moment, so there are a few projects in the pipeline and we are also looking to diversify the offering because certain prisons would be more suited to restaurants and others to cafes. We have to ensure that whatever we do fits in with what's needed outside of prison walls, and within the Hospitality industry."

The Right Course hopes to expand the charity across the UK, as well as setting up training within Women’s prisons in the future.

Watch the full interview with Fred Sirieix below:

About Lockhart Catering & The Right Course

Lockhart Catering were first involved with The Right Course back in 2017 when we helped the Restaurant at HMP Belmarsh with additional Tabletop & Kitchen Utensils from our Signature & Prepara ranges. Since then The Right Course has opened a second Restaurant & Cafe at HMP Wormwood Scrubs in 2021, which Lockhart Catering were proud to be able to support from the outset. With the help of key suppliers such as RATIONAL, Falcon & Lincat we were able to provide commercial kitchen equipment & appliances, along with Tabletop supplies from our exclusive Tableware brands Creme & Artisan. Now setup, the Restaurant & Cafe provides numerous more young offenders with the opportunity to train up for a new career in Hospitality, which will not only provide them with a new set of skills upon release, but hopefully alleviate the skills shortage our industry is currently facing.

Beverages To Look Out for This Autumn
Recipes, Chefs, Baking

Autumn is just around the corner, so Lockhart Catering Equipment have put together a range of beverages that will consume your tastebuds with indulgent autumn flavour.

Summer is here, and Lockhart Catering Equipment have put together no-fuss desserts perfect for making ahead this summertime.

The Right Course charity devised by Fred Sirieix opened their second fully functioning prison-run restaurant based in HMP Wormwood Scrubs in April 2021. The Right Course seeks to transform staff restaurants in prisons into high street like operations / businesses, as well as allowing the prisoners to gain industry-recognised qualifications and experience.

Going All Out With Alfresco Dining
Industry News, Restaurants

As the Hospitality industry continues to reopen, we have recently been allowed to enjoy indoor dining at our favourite pubs and restaurants again. Although with social distancing measures still in place a lot of restauranteurs have gone alfresco by providing a ‘weatherproof’ outdoor dining experience.