The Young National Chef of the Year competition is one of our highlights of the culinary calendar, and as proud sponsors of the event we always watch with anticipation to see who could become the next big industry names. The Craft Guild of Chefs' Young National Chef of the Year 2016 competition was the toughest yet, with fiercer talent than ever, and we were delighted to see Danny Hoang, Danny Young, and Ruth Hansom take the title, and the two runner-up spots respectively at The Restaurant Show 2015. 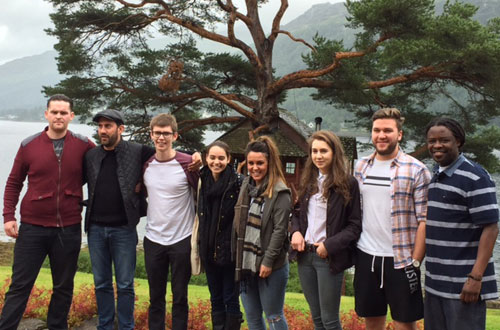 For their hard work and dedication, all finalists in the Young National Chef of the Year (YNCOTY) competition are rewarded with a food study trip to help hone their skills. In June, the eight finalists in YNCOTY 2016 were treated to a trip to picturesque Loch Goil in Scotland to discover some of the most delicious local produce, gain plenty of inspiration, and have some well-deserved fun and relaxation too. ‘Scots’ of inspiration for our young chefs Five of the finalists were able to join the prize trip, including runner-up Ruth Hansom, apprentice chef at The Ritz in London – and a seasoned YNCOTY competitor as she has already made three finals, and was a runner-up in 2013. You can read our exclusive interview with this exciting young chef here and look out for her at The Restaurant Show 2016 this October, as she has made the finals for a fourth time in the YNCOTY 2017 competition! Joining Ruth on the trip were fellow finalists Arthur Bridgeman Quin, Connor Godfrey, Victoria Scupham, and Ray Steplin. They were also accompanied by Michelin starred chef and former senior National Chef of the Year Mark Sargeant, now the ambassador of YNCOTY and chair of judges who has seen all of the young chefs start their journeys in the culinary world.

The young chefs’ trips started bright and early, beginning with a delicious brunch at The Lodge on Loch Goil, home for the night for all the guests, and followed by a fishing trip on the lake. Talk about learning about locally sourced food!

That evening our chefs had the chance to relax and catch up over pre-dinner drinks in the beautiful Treehouse at The Lodge, followed by an exquisite Modern Scottish tasting menu in the Leiper restaurant. This was an opportunity for the young chefs to really get a taste of the local food, as virtually all of the produce used in the restaurant comes from within a one-hour radius, and much of it is grown in the grounds of the hotel itself.

Following the stunning dinner, all of the guests enjoyed a rather more fast-paced second day. After breakfast at The Lodge, it was time for the guest to test their daring with a morning quad biking trip followed by a boat trip on Loch Goil – but they were all able to calm their nerves with a whiskey tasting tour, featuring a fantastic array of Scotch Whiskey's; before returning home to digest their new knowledge.

The senior finalists make their way to Denmark In October, our senior National Chef of the Year 2016 runners-up, Paul Foster of Mallory Court and Martin Carabott of the Royal Automobile Club, will join NCOTY 2016 winner Larry Jeyasekara, sous chef at Petrus for their prize trip to Denmark.

This is sure to be an incredible and inspiring trip; we’ll look forward to bringing you the coverage, and don’t forget to look out for who takes the title of National Chef of the Year 2017 at The Restaurant Show in October, which now incorporates the Lockhart Catering Equipment Expo. We’ll see you there!