From innovative catering technology to eye-catching food presentation trends, there was no shortage of interesting things to see at The Show, Lockhart’s very own catering supplies showcase which took place at Old Trafford in early July. However without a doubt the true stars of The Show were the four talented chefs that entertained guests with their live cooking demonstrations, and two of these chefs stood out in particular: Ruth Hansom and April Partridge. 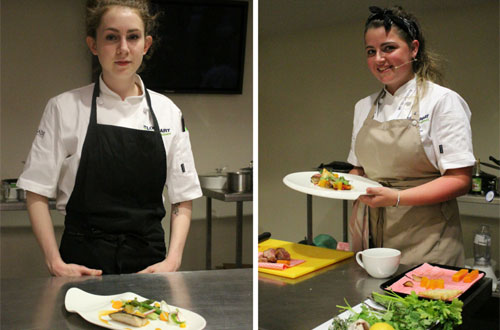 These two young, female chefs captivated the audience, but for more reasons than their delectable dishes – which were April’s delectable, Persian-inspired ‘celebration of lamb’ dish of lamb rump and slow-cooked lamb shoulder samosa, and Ruth’s fantastic red mullet and asparagus with confit fennel and spiced carrot puree, to be precise.

What really intrigued the audience was that despite being only 19 and 22 respectively, April and Ruth both exuded energy, confidence, a sharp wit and talent far beyond their years. We’re sure that they are future culinary superstars, so we thought we’d introduce them and find out more about their growing careers, and explain why these two ladies are the ‘ones to watch’.

In just a few short years, April and Ruth have made several incredible achievements which would put far more experienced chefs to shame.

Even before she had finished her GCSEs, Ruth had landed a scholarship at Westminster College, after making it to the final of the under-16 FutureChef competition, and is now an apprentice in a London restaurant that needs no introduction – The Ritz. April’s break into the culinary world was just as impressive, as her wildly successful stint in a restaurant kitchen for her work experience at age 15 led to her entering her first chef competition, where she met The Ivy’s executive head chef Gary Lee and was soon offered the position of chef de partie in his prestigious kitchen. 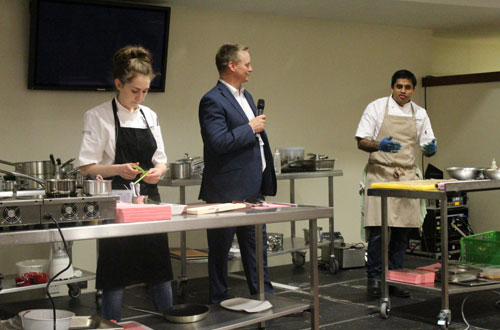 And neither Ruth nor April has become any less determined or competitive since. Both have entered several more UK competitions, and made it to the finals of two Craft Guild of Chefs’ Young National Chef of the Year competitions, of which Lockhart are the main sponsor. In the 2013 competition, April and Ruth took first and second place respectively, and both named this competition as the one that means the most to them.

“It was an absolute honour to even be nominated for the Young National Chef of the Year award and be shortlisted, but all of my friends and family saved up to come and support me which was so special. I was completely the underdog and I didn't think I stood a chance of winning,” reminisced April.

“When my name was announced it was the most unbelievable feeling I have ever experienced in my life. All of my closest family and friends cheered and the utter look of pride on their faces will stay close to my heart for a very long time. I think it's so special too because unlike a competition which is judged based on how you perform on the day, this award was recognition for years of hard work which was very humbling.” 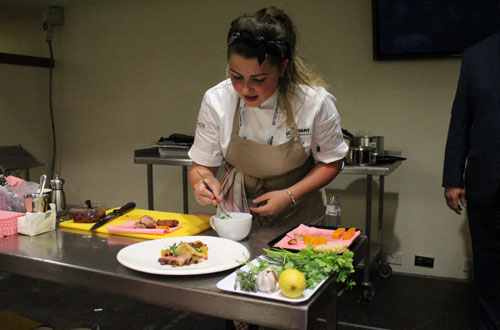 Yet taking second place meant just as much to Ruth: “Although I did not win, this is the one competition I have entered that means the most to me. I consider the Young National Chef of the Year to be the most prestigious competition in the UK for young chefs.”

However, Ruth said that she felt “happy but determined [she] could do better”, and so will be heading to The Restaurant Show in London this October to attempt once again to claim the title as a finalist in this year’s competition.

Two against the world

It’s impossible to deny that the world of restaurant kitchens is overwhelmingly male-dominated – but this hasn’t stopped either April nor Ruth from carving out their place in the industry.

“Being in the minority in this industry is at first a little bit intimidating, but after time you just get used to the ‘banter’ and give as good as you get.” Ruth explains. “I'm not one for being defeated either. I feel I am just as capable as the male chefs; I have no trouble lifting the heavy pans - so don't ask me if I ‘need a hand’!” 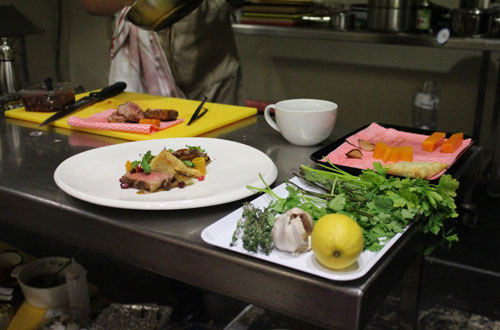 Ruth’s experience is echoed by April’s too, who has described her career in the restaurant industry so far as being “tough, hard work, exciting, and rewarding, but most importantly enjoyable”, though not without its challenges.

“Being a female in this industry is tough, but I think I have actually put the pressure on myself. I always wanted to prove to the lads I deserved to be amongst them, so I worked harder than I thought I could and pushed myself to do things I didn't think I could do.

“Obviously the kitchen environment is very macho, so I quickly learnt to have a voice and be strong in the kitchen, but I'm thankful for that as it's made me the person I am today. I am happy to be around the lads; I always wanted a big brother, now I have hundreds!”

It has certainly helped that April and Ruth have both had motivational and supportive people to look to for guidance in their careers so far. Ruth cites John Williams, her current head chef at The Ritz, and Frederick Forster, her head chef at her former role at Boundary Restaurant, as the two people she looks to for inspiration, whereas April’s motivation comes from sources closer to home as one of her best friends, Antonia Morosi, also happens to be a chef, and is always on hand with wise words when times are good or bad.

Their recipes for success

While April and Ruth’s success is remarkable, it’s entirely deserved as they’ve put in years of hard work and dedication to making their progress. For other budding young chefs hoping to follow in their footsteps, they both have some indispensable advice to share.

“My main advice would be firstly to get into a good college,” says Ruth, “then, find a good establishment to do part time work or an apprenticeship - somewhere with strong classical work ethics so you hone the basic skills.

“I also recommend eating out as much as possible, and if you like competition, do as many as you can to network!” 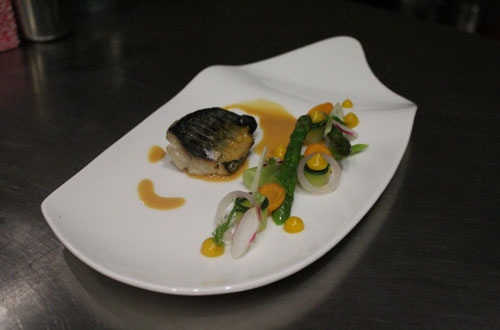 April’s advice is a little more to the point: “The only things you need to succeed in this career are a willingness to learn, a good attitude and passion. Everything else comes with time and practise. Don't try to run before you can walk, take your time, absorb everything, push yourself and it will all come naturally.

“You see cooking is a craft and it takes many years to master, and those who have made it to the top have worked their arses off to get there. This is a very challenging industry and environment, and it’s not a profession that should be taken lightly. Also, never forget your roots - staying humble is one of the best attributes you can have not only as a chef, but as a person too.”

And finally, April has three key tips that she always remembers whenever she steps into a kitchen. “There are always people better than you, so push harder every day. Then to always show respect, to ingredients, people, and your equipment. And finally, don’t serve something that you wouldn’t eat yourself. Everyone is a VIP, so give it everything you have.”

If you’d like to see Ruth in action, as well as heading to The Ritz you can catch her in the final of the Young National Chef of the Year competition at The Restaurant Show at London Olympia, on Tuesday 6th October, and in August April will be moving to her new role in the kitchen of The Clove Club in Shoreditch. You can keep up with Ruth and April by following them on Twitter at @ruth0310 and @chefpril. Catch them while you still can!